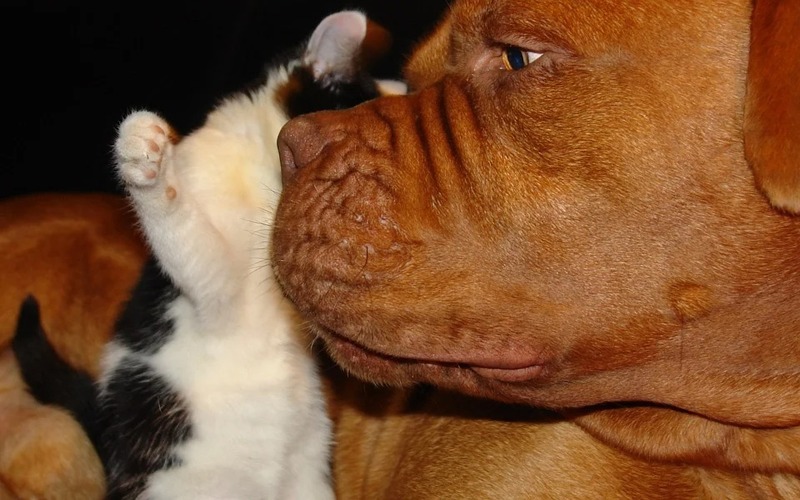 An amazing friendship of a dog and a little kitten. They even slept together.

Mars has never been hungry. More precisely, the owners thought so. To feed a huge dog, that spent a tidy sum every month.

Mars himself never refused the “supplement”.

Moreover, the proud dog didn’t beg for it from the owners, but got it himself during walks. Half-eaten pies, a carcass of a pigeon-these and other “delicacies” Sergey literally pulled out of Mars’ mouth more than once.

The dog, which usually behaved melancholy in such cases showed agility unusual for him: he instantly grabbed and tried to swallow the “yummy”. he bore the punishment well.

Mars, you act as if you’re not being fed! I’m ashamed of you in front of other dog lovers! Is that what you lack, that you throw yourself on a half-eaten bun, as if you haven’t been fed for three days?-Sergey strictly reprimanded Mars.

He pursed his ears and looked at the ground, unconditionally admitting his guilt. But the next time, in the same way, he secretly approached what he considered worthy prey-and instantly grabbed it, like a shark prey. And without waiting for the owner to start cursing, he immediately pursed his ears.

In early Spring, Sergey led Mars along his usual evening route. The walk started out great. The road of adventure led the dog further, to the nearest bushes. He was clearly interested in something. And Sergey immediately had a suspicion that the dog had discovered the “additive” to dinner.

The dg carefully approached the bushes and made a movement with his muzzle. Sergey overcame the distance to the bushes in two jumps, intending to pull something out of the dog’s mouth.

This time, such measures were useless. Mars wasn’t going to eat anything. On the contrary, he very gallantly poked his nose into a black and white lump, which was not visible from the road.

The kitten, apparently also didn’t expect, that a huge monster would jump up to him and begin to examine. And then Sergey arrived in time. The kid backed up a little and hissed-what if these monsters turn out to be cowardly?

Mars poked at the cat. Then he looked at the owner: “I want this for myself! Let’s take it. Others hold, I myself saw through the window!”

A couple of hours later, Mars lay lazily on his couch, preparing for a regal sleep. Next to him tossed and turned bathed kitten, which turned out to be a girl. So far he was frankly afraid of new people, but Mars immediately recognised, if not a folder, then at least an older brother…