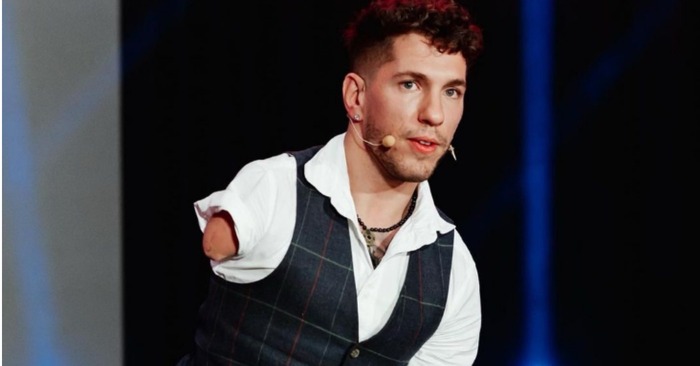 23-year-old Nick Santonasso from Florida has a serious genetic condition. Nick was born without two legs and one arm but the brave-hearted guy has never lost his hope for the bright future.

Nick became aware of his uniqueness since early childhood years as the little kid had to sit on a wheelchair and wasn’t able to do elementary things.

The guy has always been strong-willed and ambitious enough not to ever give up mastering in skateboard, then learning how to play the drums. Exactly at that time, he clearly realized that he should accept himself the way he was born. Currently, Nick encourages others to love themselves and never give up on hoping for the best.

By the way, this extremely rare syndrome has been found to happen to only 12 people in the whole world. Now Nick has become a successful bodybuilder who periodically trains in the gym and actively participates in different contests and competitions.

The praiseworthy guy lifts the barbell, does the bench press and even flips a huge 70-kilo tire. Nick also drives a specially equipped car and remains independent.

He not only believes in himself but also encourages and motivates others to believe in themselves and live a complete life. The man actively leads his Instagram account regularly posting his pictures, videos and inspiring messages. He is quite an intelligent and clever man who considers that great success lies behind the constant movement or dynamic.

As long as one wants to achieve something and never stop moving forward, he or she will definitely win.

It is worth mentioning that Nick is not only intelligent and knowledgeable but also charismatic. The guy has an excellent sense of humor as well.